Screening of Didem Penün's film Araf at the Berlinale 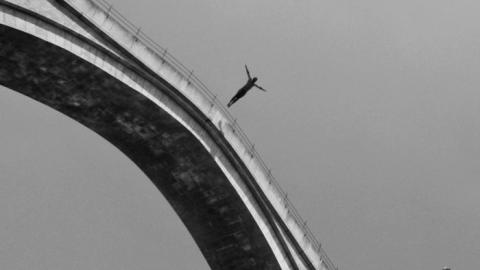 Araf, a film written and directed by Didem Pekün, Affiliated Humanities Initiative Teaching Fellow at IAS had its world premiere as part of the programme of the 68th Berlinale in February 2018.

Araf is an essayistic road movie and diary of a ghostly character, Nayia, who travels between Srebrenica, Sarajevo, and Mostar in Bosnia. She has been in exile since the war and returns for the 22nd memorial of the Srebrenica genocide. The film is guided by her diary notes of the journey, which merge with the myth of Daedalus and Icarus – Icarus being the name given to the winner of a bridge diving competition in her home country. The story of Icarus and Daedalus, a myth symbolic of man’s over-ambition and inevitable failure, is woven throughout the film as a way to think about exorcizing the vicious cycle of such events happening in the future and of a possible reconciliation. Nayia also thinks of Icarus from a different perspective, that of seeing the optimism of such a leap, his braveness in taking a leap into the unknown in this era of radical instability, that perhaps Icarus wanted to write a different narrative. Araf thus traces these paradoxes through Nayia’s displacement and her return to her home country post-war – that of a constant terror and a permanent standstill, and the friction between displacement and permanence.

For further details see the movie's webpage in the Berlinale's program.