The Anatomy of Post-Communist Regimes. A Conceptual Framework: a book by the former IAS Senior Core fellow 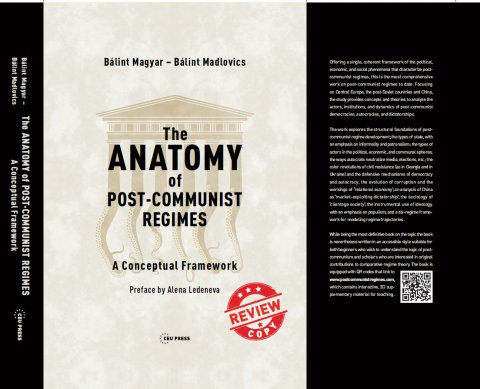 The work explores the structural foundations of post-communist regime development; the types of state, with an emphasis on informality and patronalism; the types of actors in the political, economic, and communal spheres; the ways autocrats neutralize media, elections, etc.; the color revolutions of civil resistance (as in Georgia and in Ukraine) and the defensive mechanisms of democracy and autocracy; the evolution of corruption and the workings of “relational economy”; an analysis of China as “market-exploiting dictatorship”; the sociology of “clientage society”; the instrumental use of ideology, with an emphasis on populism; and a six-regime framework for modeling regime trajectories.

The book was finalized durign Balint Magyar's fellowship at IAS CEU in 2018-2019.