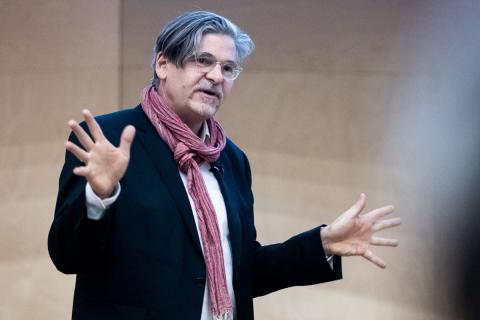 On the 23rd of January Jan-Werner Mueller delivered a lecture which pulled in a full house at IAS and CEU As the Princeton political scientist addressed head-on a pressing issue of today: ‘Is Christian Democracy Illiberal?’ Professor Mueller’s lecture took place as part of the Institute for Advanced Study annual gathering of its Academic Advisory Board.

Renowned for his contributions to political thought --most recently in the hugely influential What is Populism?-- Mueller asks a hardly random question. In some European contexts, the ruling parties explicitly link the notions of ‘illiberalism’ and ‘Christian democracy’ - proclaiming that both mean the same. ‘Not quite’, says Mueller.

In the decisive momentum of the French Revolution, Christian democratic thought emerged as an intellectual response to several important dilemmas:  how to make democracy and religion safe for each other and how to reduce growing uncertainty without hampering democracy. In Europe, the question ultimately became how can democracy embrace religion and growing religious diversity.

Mueller highlights three strategies that became the guiding ideas for different strands of Christian democratic thinking. The first group of Christian democrats thought along the lines of ‘catholicizing’ liberalism, the second contributed to human rights becoming an important democratic mechanism. The third channeled their aspirations through political parties.