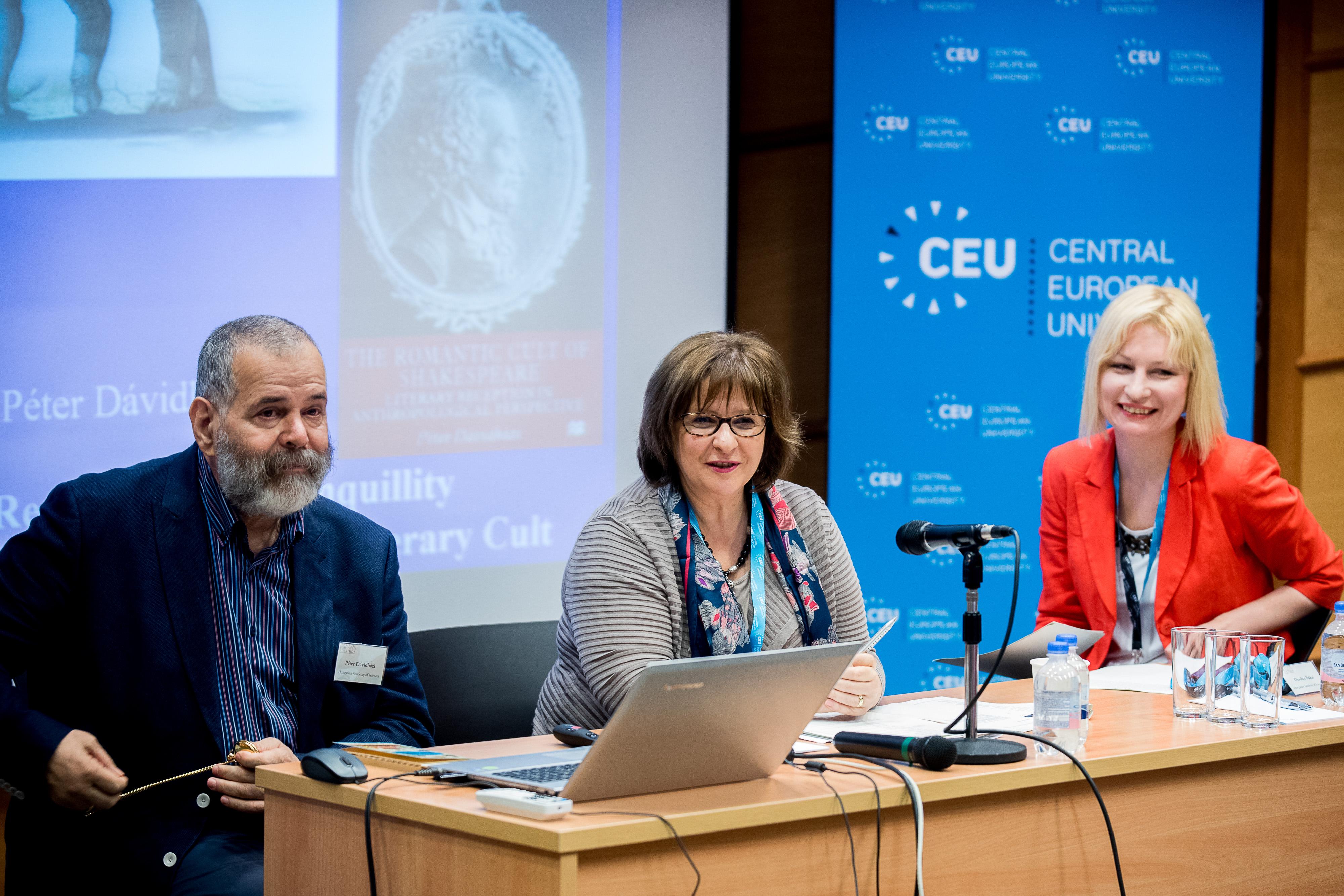 On Friday June 10, 2016, an international workshop “Literary Cults: Transnational Perspectives and Approaches” took place at IAS CEU. The workshop, organized by Alexandra Urakova, current Senior Fellow at IAS CEU, and Zsófia Kalavszky, a researcher at the Institute for Literary Studies, HAS, pursued two objectives. It aimed at coordinating and continuing the work of literary researchers from Hungary and Russia who have been working in the area of cult studies during the past decades. Second, it invited researchers from other fields, IAS fellows, CEU faculty, and international scholars from outside the CEU to connect with this Hungarian and Russian research on literary cults and to develop new theoretical, inter- and trans-disciplinary perspectives on the subject. The results achieved took the research on cult phenomena at least two important steps forward. Historians and political scientists discussed literary cults as a specific template of broader cultic phenomena alongside literary scholars. The participants of the workshop, thanks to Nadia Al-Bagdadi’s brief intervention on Arabic literary culture, were invited to explore a new geography of literary cults going beyond Western and Westernized, Euro-centered cultural scheme. 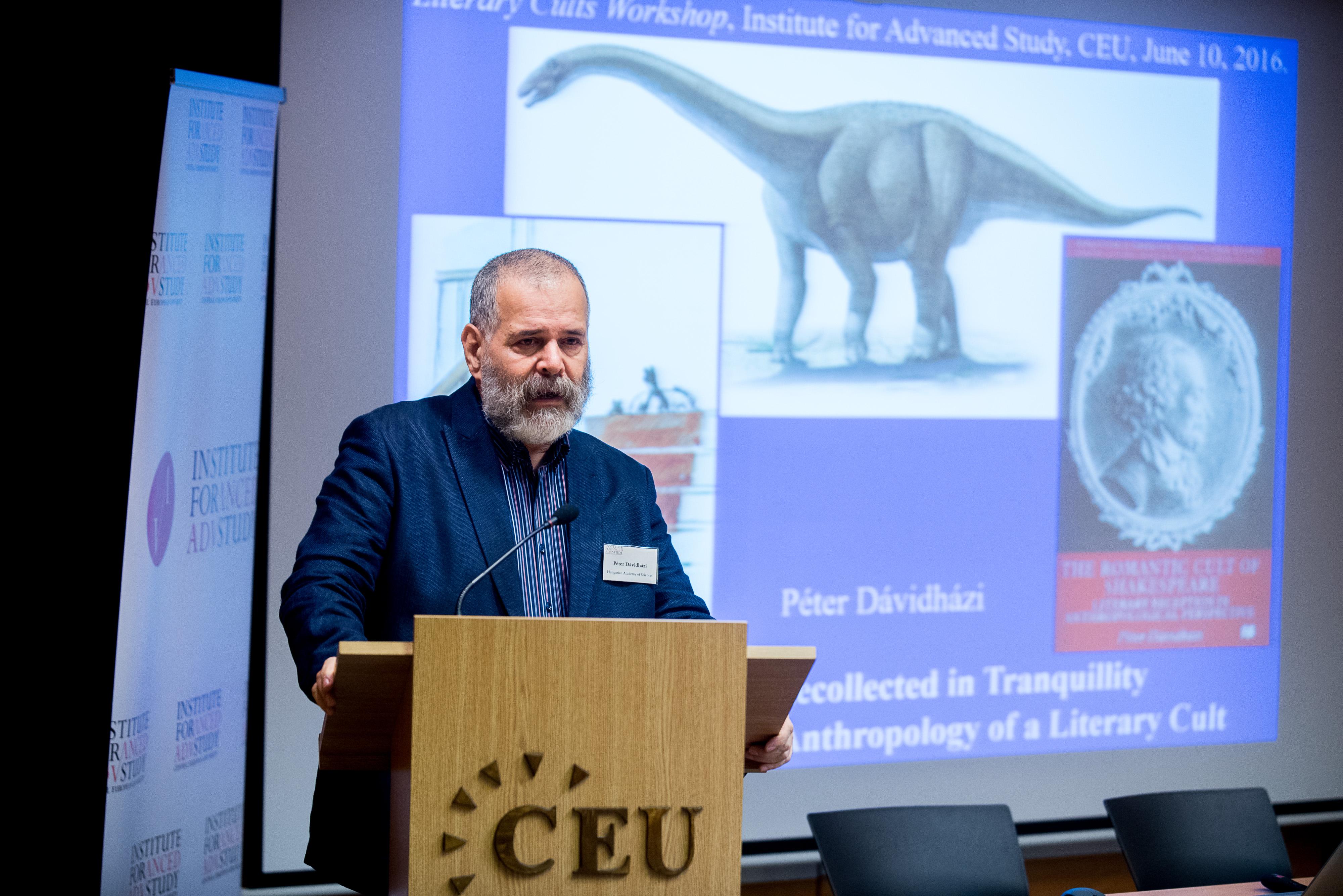 The first panel with the partipation of the key-note speaker, the founder of Hungarian cult studies and author of books on literary cults Péter Dávidházi, reflected upon the development of the discipline and its discourse. Both Dávidházi and Alexandra Urakova after him were speaking about the obstacles and discontents that Hungarian and Russian scholars came across in their attempts to address and conceptualize literary cults. At least partly, these discontents had to do with alleged insignificance of the cults seen in terms of “misplaced religion,” their engagement in commercial or media culture that has made the meaning of the word in relation to literature terminologically elusive and obscure. At the same time, both speakers agreed that literary cults are important symptoms of modern culture engaging literature in extra-literary processes that include mimetic practices, ritual, and worship. One of the symptomatic paradoxes of modern literary cults was pointed out by Peter Stallybrass during the discussion that followed: cults simultaneously elevate and marginalize authors when they prioritize the autonomy of their fictional worlds and characters. Therefore, it is important to distinguish between cults of authors and cults of books (say, the cult of Shakespeare vs the cult of Don Quixote). Another important question – of historicity and continuity of literary and political cults, was raised by Gábor Gyáni; do cults that we observe in the 20th century spring from the 19th century tradition or rather should be seen as discontinuous models?

The second panel focused primarily on literary material within a broad geographic scope moving eastwards – from contemporary America half-mockingly, half-seriously venerating its 19th century dismissed national genius, Edgar Allan Poe – through iconoclastic literary representations of Alexander Pushkin’s Soviet and Post-Soviet jubilee celebrations – to the 19th century Arabic nahda (Renaissance) movement. All the three speakers – Stephen Rachman, Zsófia Kalavszky, and Nadia Al-Bagdadi – addressed the question of the dynamic relation between culture and cult coined in the formula suggested by the title of Al-Bagdadi’s intervention: “when the culture becomes cult,” or vice versa when the culture fossilizes cults appropriating and simulating their forms. 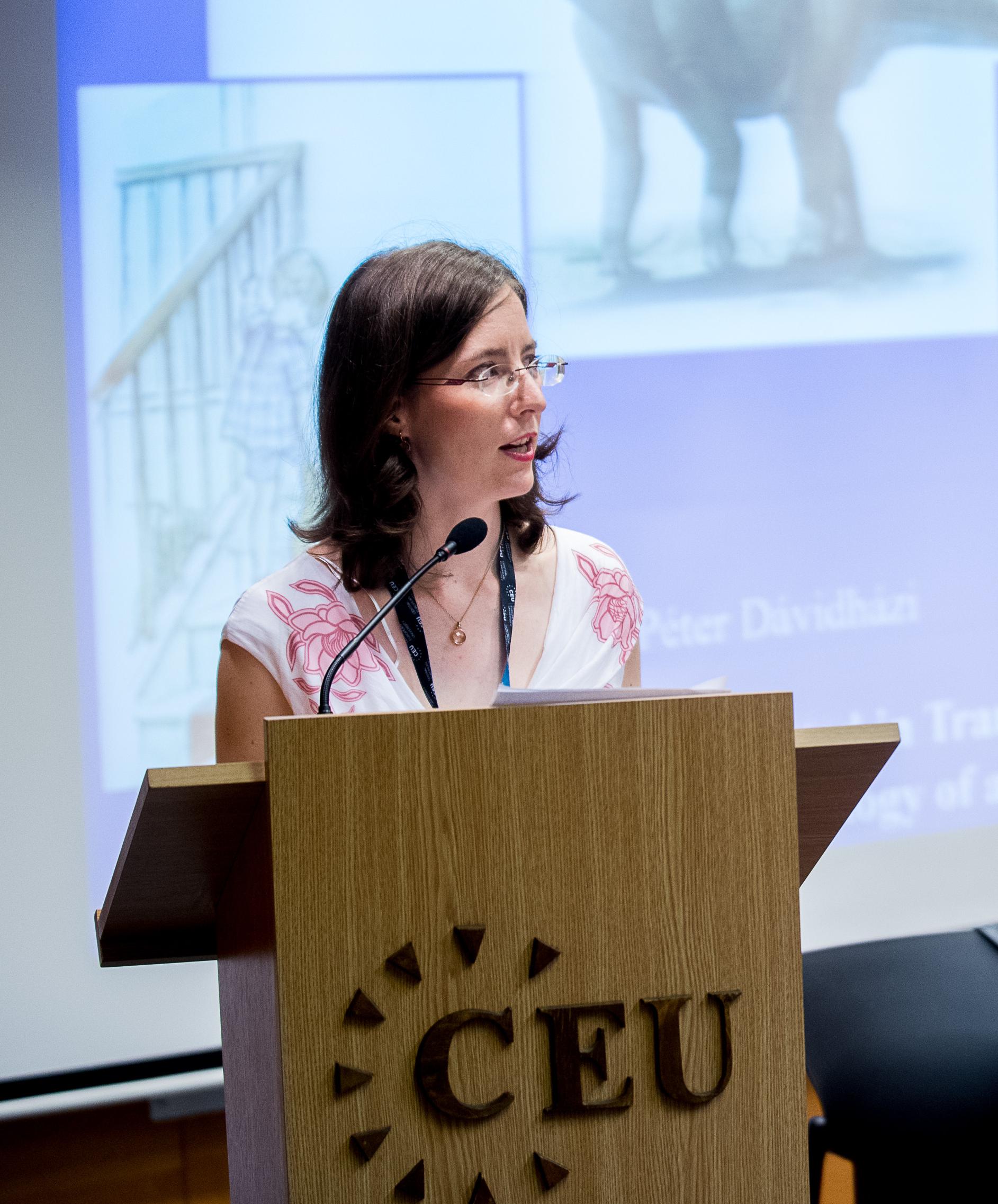 Rachman talking about the Midnight Toaster, a mysterious figure placing a half empty bottle of French cognac and three roses on Poe’s tombstone on his birthday (1949-2010), suggested seeing the alternation of rituals and routines as a form of dynamic interaction between cults and culture. Kalavszky, interpreting cult as a linguistic event, spoke of competing cults, political and literary, in the Soviet and post-Soviet “Pushkiniana” (Pushkin-related fiction). She analyzed a striking example of such competition as represented in a fragment of Sideburns, Yuri Mamin’s 1990 film in which a post-Soviet sculptor reshapes Lenin’s bust into that of Pushkin. Al-Bagdadi, addressing a specific case of the emergence of Arabic popular literature in the 19th century, pointed at the paradoxical status of literary cults – “the means of modernization that go beyond the modern time,” analogically and genealogically related to a long tradition of religious culthood.

The politics of cults touched upon in the second panel whether in relation to subculture (Rachman), cult of literature (Al-Bagdadi), or iconoclasm (Kalavszky) became the main focus of the third panel. Talking about the cultic afterlives of Anne Frank, Louise Vasvári explored the mechanisms of Frank’s iconization and fictionalization and proposed a tentative connection between cult and death: Anne Frank was canonized as a dead, hence silenced virgin, a perfect victim that can be alternately or simultaneously reduced to a child or promoted to a sexual icon. Orsolya Rákai gave a retrospective account of Hungarian cult studies while two political scientists – Hans-Jörg Sigwart and Jessica Pisano – offered theoretical approaches to the study of literary cults. Sigwart, bearing on Hannah Arendt’s idea of “Pariah” as a literary figure, suggested conceiving literary cults as a counter-concept of classicality and emphasized that the theme of marginality is crucial for the study of the discursive function and effects and the peculiar dynamics of cultic phenomena. Pisano addressed the subject from the perspective of the state-sanctioned hagiography as represented in Soviet museum culture focusing on the pedagogic of the sacred. Among the cult-related issues she suggested for discussion were the problems of reproduction and continuity, translation and transnationalism, hybridity, the personal and the communal, representation of life and (echoing both Rachman and Vasvári) the importance of death. One of the most intriguing questions during the discussion was the question whether literary cults may be described as mechanisms of creating affective ties among adepts and what shall we do if we share literary tastes with an unsympathetic political leader? In this case, which language should we use to describe and differentiate cults? 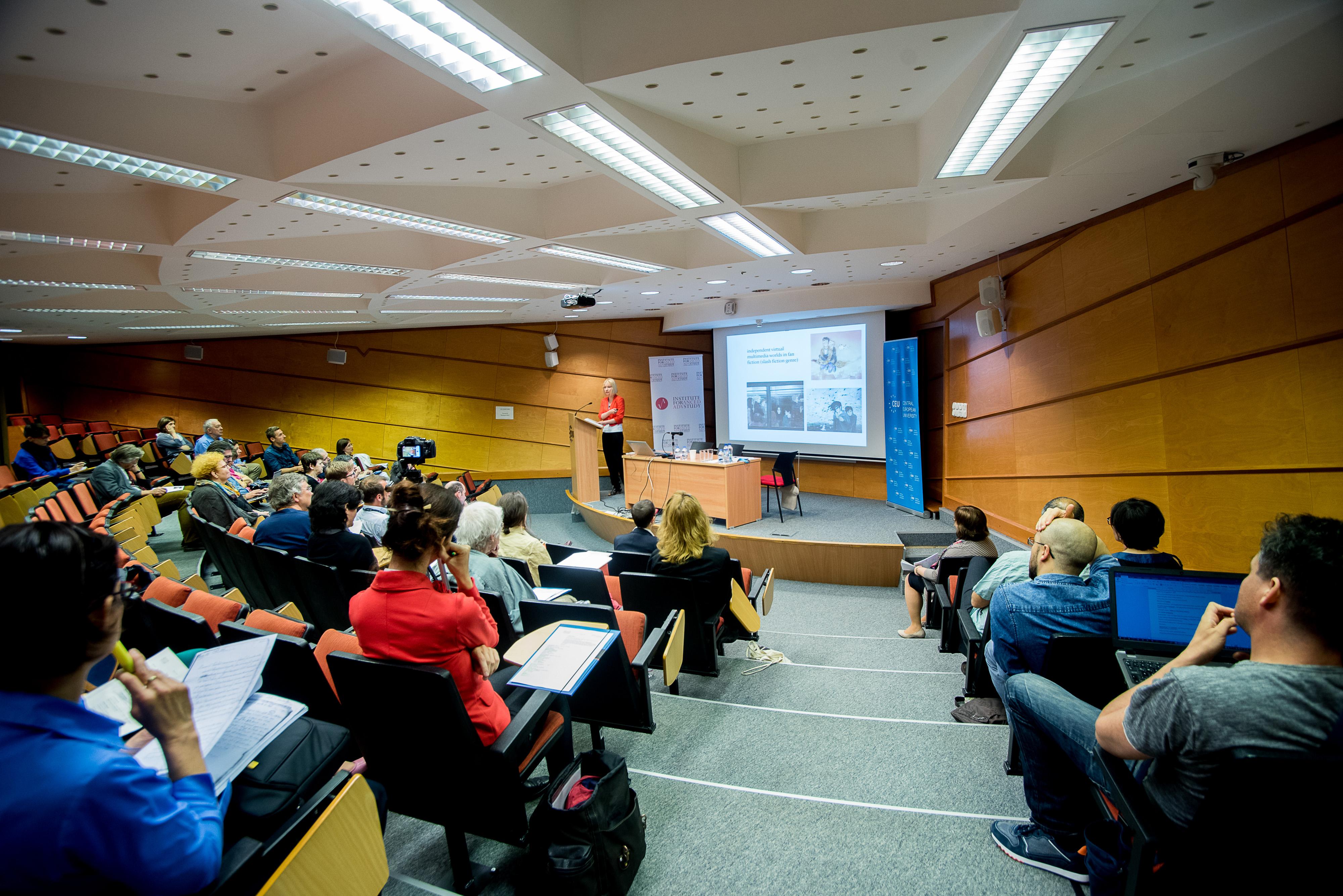 The overall discussion was turning around questions regarding the concept’s applicability and the ways of its further conceptualization.  While many of the questions remained open-ended, it became clear that we should speak of literary cults as of complex, multi-level cultural phenomena and develop a flexible theoretical framework to study them. Albeit not easy to pin down as a defined set of criteria, literary cults themselves may become effective tools to reconfigure and redefine the function of literature within contemporary culture. They allow us to consider literature in its otherness, as part of larger social and cultural formations, challenge traditional binaries commonly used to describe the cultural hierarchies (the classic and the popular, the highbrow and the lowbrow) and eventually revisit the discoveries of literary anthropology and cultural studies of the 1980s and 1990s with an eye to developing a new set of critical tools and shared vocabularies through which to understand culture and its functions. A tentative research agenda expands in various interdisciplinary directions – towards sociology, social and literary anthropology, media studies, political science, material culture history, intellectual history, and cognitive philosophy.